in Agronomija, Novice
Čas branja: 2 min branja
A A 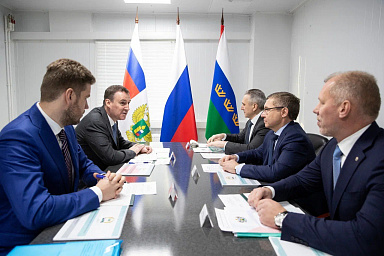 During a trip to the Tyumen region, Minister of Agriculture Dmitry Patrushev held a working meeting with the head of the region Alexander Moor. The parties discussed the current indicators and prospects for the growth of the regional agro-industrial complex.

As Dmitry Patrushev emphasized, this year a rather high index of agricultural production is recorded in the region, exceeding the national average. An important task remains the systematic improvement of the well-being of workers in the industry. Wages in agriculture in our country are growing year by year, a similar trend is observed in the region. The minister also noted positive indicators in terms of bringing state support for the agro-industrial complex to farmers, which is already 77%.

This year, the region is harvesting without failures. More than 2 million tons of grain were harvested, which significantly exceeded the original forecast. Compared to last year, there is an increase in rapeseed, potatoes and vegetables. The head of the Ministry of Agriculture urged to ensure control over the preparation of material and technical resources for the sowing season of 2023 and the implementation of the area structure.

Competent work in the field of land reclamation significantly increases the efficiency of production in crop production. 11 projects from the region participate in the state program for the involvement in the circulation of agricultural land and the development of melioration, the volume of subsidies from the federal budget is about 18 million rubles. All funds are brought to the recipients. For the next year, 9 projects worth 13 million rubles were selected.

In the livestock industry, positive dynamics is observed in poultry production. The minister noted the project of the Damate group of companies, the launch of which is important for the entire industry, as it will reduce dependence on foreign supplies of breeding material. To increase the production of hatching eggs and reduce risks in meat poultry farming, starting from this year, up to 20% of the costs for the creation and modernization of loudspeakers in poultry farming will be reimbursed. The loudspeaker of Damate Group of Companies can receive such support after commissioning.

Also, according to Dmitry Patrushev, the Tyumen region is one of the few regions that proactively implements projects to introduce genomic breeding of dairy cattle. In the future, this will have a positive impact on the growth of the productive qualities.